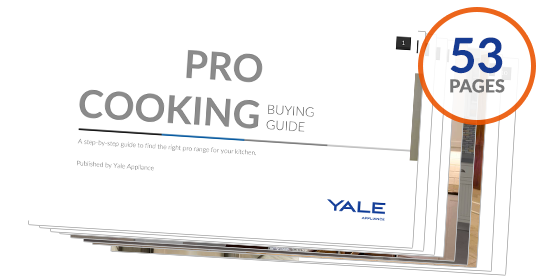 This cooking test was done on an infrared gas broiler versus a radiant electric broiler.

I prepared a NY strip to see the difference in the coloring of the protein and how well the fat would render plus the time it takes to cook.

Let’s start with the technology of the infrared broiler first.

I used the gas infrared broiler in the BlueStar Pro range.

The broiler burner consists of a set of ceramic plates with evenly spaced little holes (around 200 per square inch) that allow the air and gas to flow through.

Heat radiates through the ceramic plates directly onto the food. The approximate burning temperature can get as high as 1,650 F.

The ceramic plate is usually rectangular in shape and centered across the top of the oven, limiting the cooking area. This is much more efficient and even than a gas broiler.

Infrared broilers also use less energy and time to achieve standard cooking results. The preheat time is also minimal, making the cool down timeless as well. The infrared broiler delivers a more direct heat to the food which warms less air resulting in quicker cooked foods.

This will naturally keep less moisture from evaporating in proteins, keeping them juicier and more flavorful. Lastly, there is only one temperature setting on the broiler, which is high. The only way to control the heat is by placing your food on different racks, which change the distance of the food to the direct heat.

The NY strips steaks were lightly oiled and seasoned with salt and pepper, then placed on the top rack of the BlueStar oven around 2 ½ minutes after it was turned on. I flipped the steaks after 5 minutes and continued to cook them for another 3 minutes.

Check out the results below: 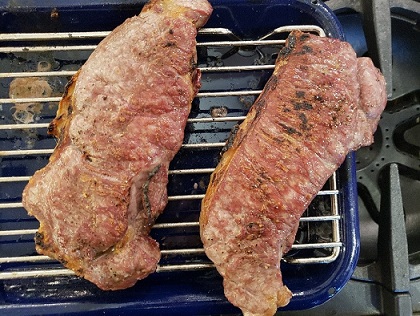 There is noticeable color and char on the protein and fat of the steak. I allowed it to rest, sliced into it and achieved a perfect medium temperature all the way through. My total cook time was 10 min 39 seconds. 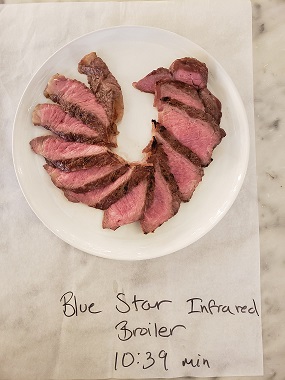 Now let’s move onto electric broilers which are generally considered to be an efficient and low maintenance way to cook. Today I used the broiler function of a dual fuel 48-inch range.

This has 3 heat settings (Hi, Medium, and Low), plus also a convection broil option. The electric oven broilers consist of a calrod heating element which is also known as a pass system.

This spans the top of the oven, giving more consistent and wider coverage. The calrod heating element requires at least 5 minutes to heat up and can reach temperatures upward of 600 F.

I prepared this steak the same as the previous steak. There was some difference in time as well as final results. 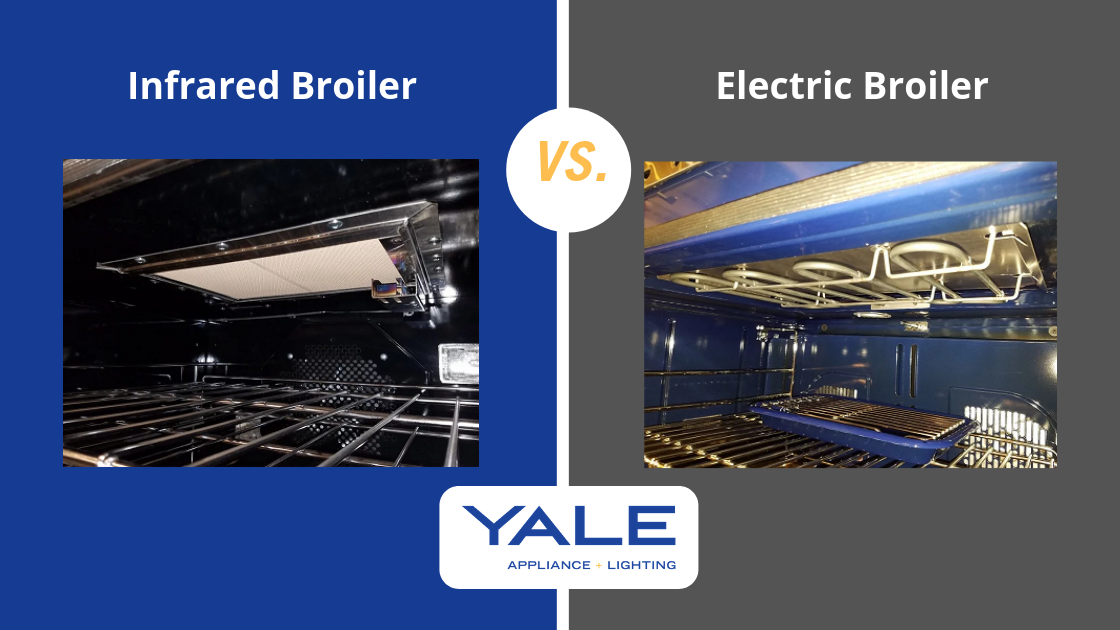 The first difference was in preheat time, I placed the steaks on the top rack of the oven 5 min after turning the broiler on high. The distance of the top rack to the broiler was less than in the infrared broiler.

I then flipped the steaks after about 6 minutes and pulled them out of the oven at 17 minutes and 57 seconds. Including the additional preheat time, the completed steak took 8 minutes longer. If we are looking at just cook time, the electric radiant broiler took 2.5 minutes longer to cook.

Check out the image below: 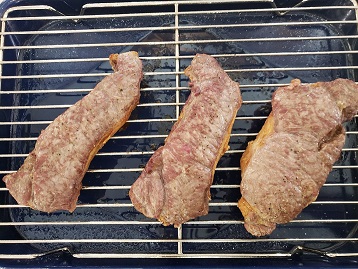 There is much less char on the outside of the protein, and some inconsistency with the browning. I allowed the steak to rest, then sliced into it noticed a significant difference in the texture and color.

There is a lot less of the red color showing here, which is a direct result of the impact of the distance of the coils from the meat.

Now let’s look at the results side by side: 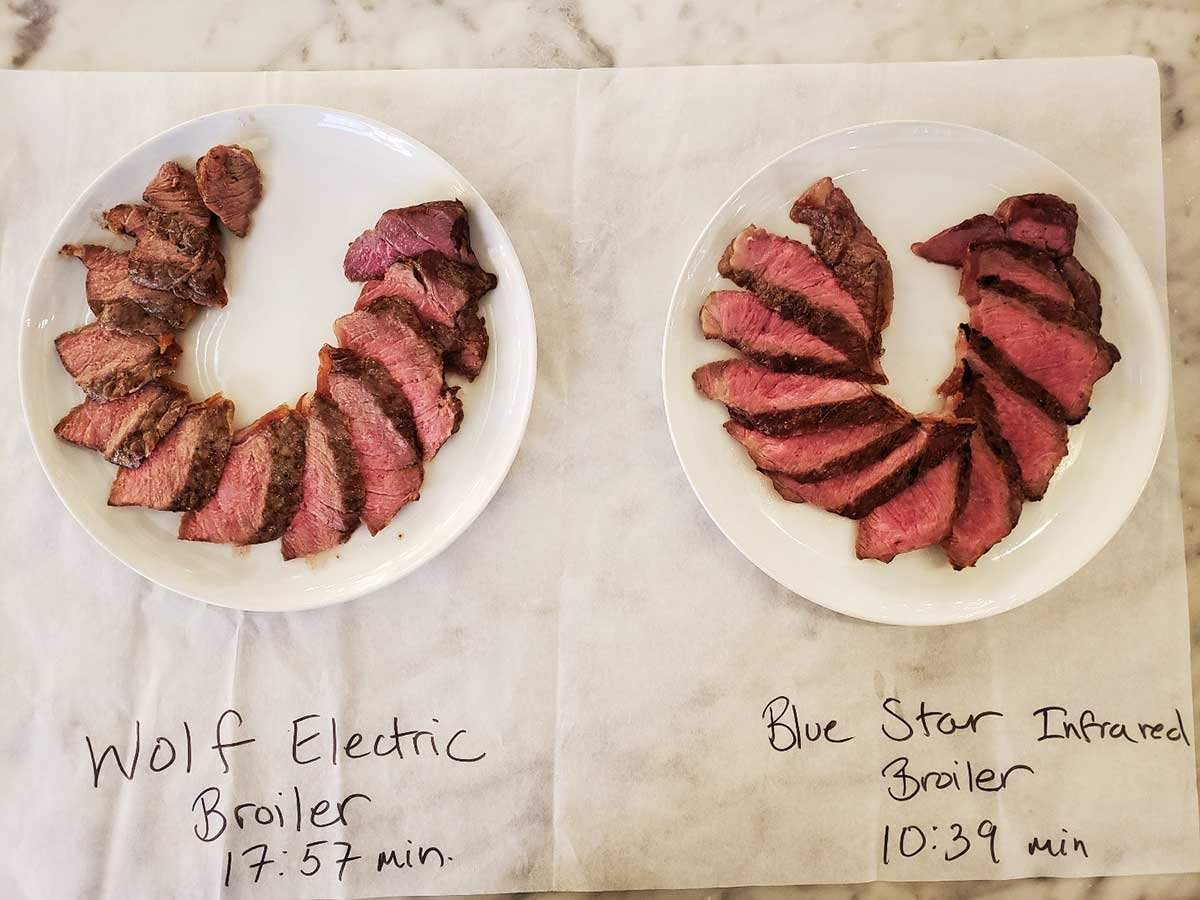 Our staff did a taste test and were all unanimously in favor of the results from the BlueStar Infrared Broiler. With a shorter cook time and more juicy results, it’s easy to see why.

Gas Infrared broiling is by far better than electric. So, before you automatically buy a dual fuel, consider all the cooking modes.

If you like to roast or broil, then gas is a better option for you. The money savings isn’t bad either.

What is the difference between baking and broiling?

The Bake setting is traditionally the heating element from the bottom of the oven and broil is intensive direct heat from the top generally used in quick cooking scenarios such as melting cheese, a thin piece of protein (steak/chicken/fish), or browning a bread crumb topping.

What is an infrared broiler?

A gas infrared broiler heats a solid element, in most cases it’s a set of ceramic plates containing hundreds of evenly spaced holes across the surface. Air and gas flow through these holes to burn at extremely high temperatures. The ceramic plates radiate heat directly to the food. This is much more even than electric coils which are used in radiant thermal broilers or in traditional gas broilers.

What's the difference between a regular gas broiler and an infrared gas broiler?

Infrared is better because it is a direct heat source. The regular gas broiler spreads the heat further into the air and not directly on the meat.

BlueStar, Thermador, and Wolf use the better gas infrared broiler.

What is a Salamander Broiler?

A Salamander broiler is a countertop appliance that uses powerful infrared ceramic broilers. It can also be installed above a range.

Looking for more information about professional ranges? Get the Yale Pro Cooking Buying Guide with specs, BTU outputs, and detailed profiles of all the major brands like Wolf, Viking, Miele, JennAir, GE Monogram, Thermador, and more.  Well over 400,000 people have read a Yale Guide.