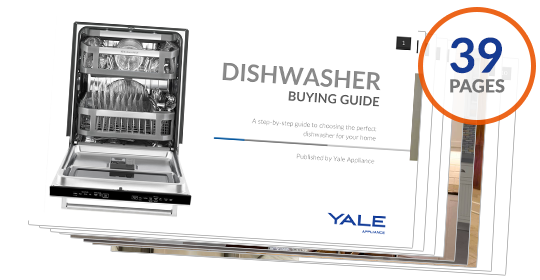 Learn the most reliable brands, best new features and how to buy at the best possible price in this Free Dishwasher Buying Guide. Over 880,000 people have learned from a Yale Guide

This should be a simple article.

Bosch is the manufacturer of Thermador dishwashers. They are produced in the same factory in New Bern, North Carolina.

Yet, they are not identical.

Which one is better and what should you buy?

That's a much more difficult question to answer. In fact, it is more complicated than it should be.

In this article, you will learn when to buy a Bosch or Thermador dishwasher based on two dramatically different yet common scenarios.

We will review the two most common dishwashers from Bosch and Thermador (Thermador only has two models). Then we'll offer different suggestions determined from these models. 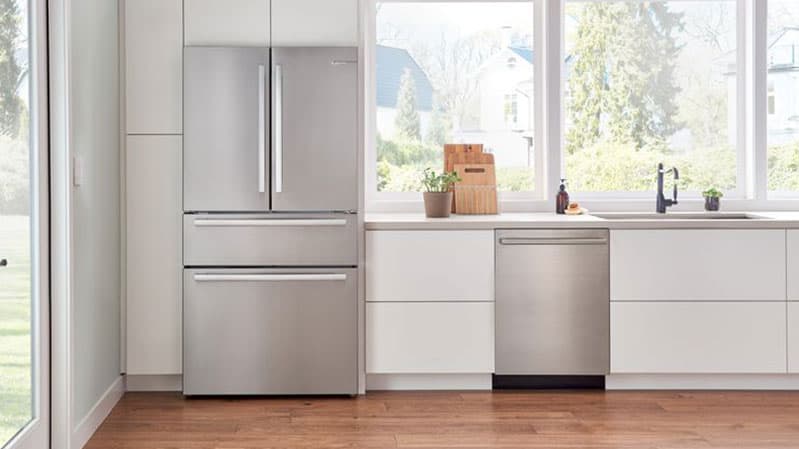 Bosch is part of the BSH company, a German multinational.

They first became popular in the early 1990s with a quiet, affordable dishwasher. Back then, silence ratings were not a sought-after feature.

They operate the largest dishwasher manufacturing facility in North Carolina and have significant manufacturing in the United States.

Bosch has been hit pretty hard by the pandemic of 2020 and now the component crisis of 2021.

They once manufactured 114 models. Now it's only 52, which is still about 45 more than most other brands.

They vary in features and escalate in price. However, the step-up in the series does not always make sense, as you will see. 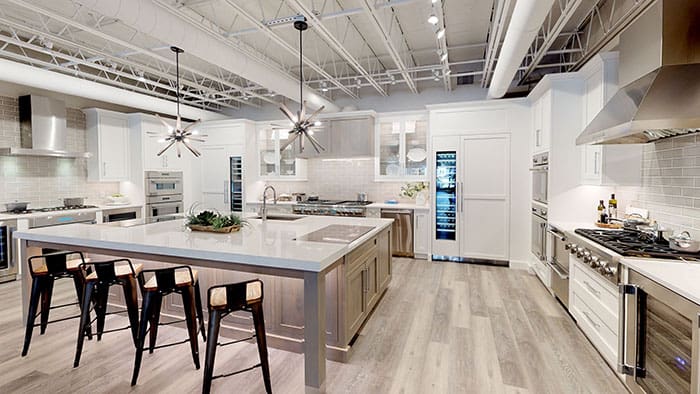 Thermador was the original American premium manufacturer. Bosch bought them in the 1990s.

About 15 years ago, Thermador launched its landmark One-Two-Free program.

You can receive a free dishwasher if you buy qualifying cooking appliances from Thermador like a pro range or cooktop and wall oven.

Bosch has curtailed Thermador's models from seven models to two, the Star Sapphire and the Emerald.

In this article, you will see a comparison between the Bosch 800 Series and Thermador Sapphire dishwashers, as well as the Bosch Benchmark and the Thermador Emerald dishwashers. 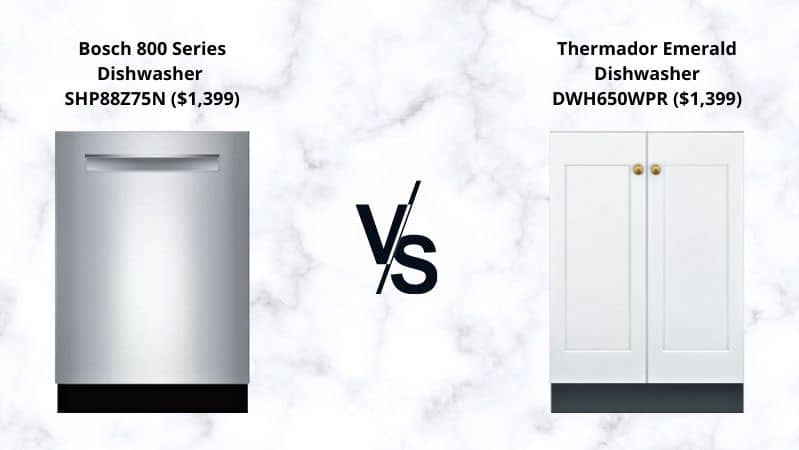 RackMatic Racks: I love the ambiguous trade name, but the racks have nine positions to move the top rack up, down, or to either side.

Same Washing System: Bosch and Thermador dishwashers both feature two arms and a sprinkler head on the top.

Stainless Tub: Bosch may have been the first with a stainless steel tub, but every premium manufacturer has one.

AquaStop: Bosch and Thermador dishwashers feature sensors to detect leaks and shut the dishwasher off. Miele and Bosch are the best if you live in a new condo on the 20th floor in Boston, for example.

Wi-Fi: Thermador has Wi-Fi allowing you to control the dishwasher from their HomeConnect app. It will even text you when the cycle is done.

Cycles: Bosch has way more wash cycles. Then again, Thermador has most of the ones you use, like Pots and Pans and Normal.

Third Rack: Both have a third rack, but the Bosch MyWay rack has more room to hold more.

Silence Ratings: Bosch is 42 dB (decibels), so it's noiseless. Thermador is 48 dB. You will be able to hear the Thermador. It's 4 dB higher than the 44-decibel standard.

Drying: Thermador uses a regular condensation drying system. The drying cycle uses the heat from the wash, JetDry, and a longer drying time.

Bosch has the best drying system with CrystalDry and AutoAir. It employs Zeolite, a volcanic element, to increase heat and absorb moisture to dry even less dense items like plastics.

AutoAir opens the door at the end of the cycle to release heat and moisture.

It works based on our tests, even on the recently discontinued Thermador Star Sapphire dishwasher with a 20-minute wash and dry cycle.

Which Dishwasher Should you Buy?

It seems like a slam dunk for the Bosch 800 Series Dishwasher SHP88Z75N with a better third rack, CrystalDry, and a quiet sound level at 42 dB.

However, when you buy a Thermador range, the rebate effectively reduces the Thermador to $0, which is a pretty good price.

A good option is to spend the $1,399 on another Thermador product and buy the Bosch dishwasher or even a lesser but more featured series dishwasher.

The next comparison is baffling. Let's take a look.

They have the same features as above and a few more such as:

Wi-Fi: They both operate on the Bosch HomeConnect system. It's pretty highly rated as well.

Cycles: Both have an endless amount of wash cycles.

Third Rack: Both dishwashers have the same expanded third rack.

Drying: Thermador's dishwasher has its StarDry system with Zeolite, similar to Bosch's CrystalDry system. All of Bosch's Benchmark dishwashers have CrystalDry as well.

TFT Display: Bosch Benchmark has a TFT display or an enhanced LCD screen with seven wash programs and seven wash options. The Miele G 7900 series, around $3,000, is the only dishwasher with more cycles.

Which Dishwasher Should You Buy?

Thermador is $900 cheaper due to their rebates than the Benchmark and $400 less than the 800 series.

In many ways, the Thermador dishwasher is similar to the Bosch. It has Wi-Fi as an added benefit.

However, you may want to spend that rebate on another Thermador product in a package and buy a less featured Bosch dishwasher between $899-$1,399 for a solid dishwasher.

But what if you are looking for just a dishwasher?

Thermador One-Two-Free and the Dilemma of a Free Dishwasher 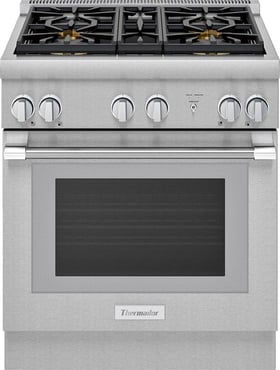 It's a worthy range to consider with two 18,000 BTU and two 15,000 BTU burners, convection, and an infrared broiler so you can bake and still sear a steak.

The $4,949 price is high for a range but low for professional ranges overall. It is the second-lowest after JennAir.

The range is competitive for replacing your existing range.

But if you have an existing kitchen and dishwasher, a new dishwasher does not help much.

So what do you do then?

You can always sell it on CraigsList or Facebook Marketplace, but then you have an additional hassle of moving and selling.

Perhaps you can receive store credit from your appliance dealer towards anything else.

But what's that $1,399 dishwasher worth for a store credit?

Many dealers will offer $700, citing the 48 dB rating even if Thermador is the better name and has Wi-Fi.

One thousand dollars is fair because they made a sale (the range) and another (the store credit).

They can handle selling your dishwasher for a $0 profit. 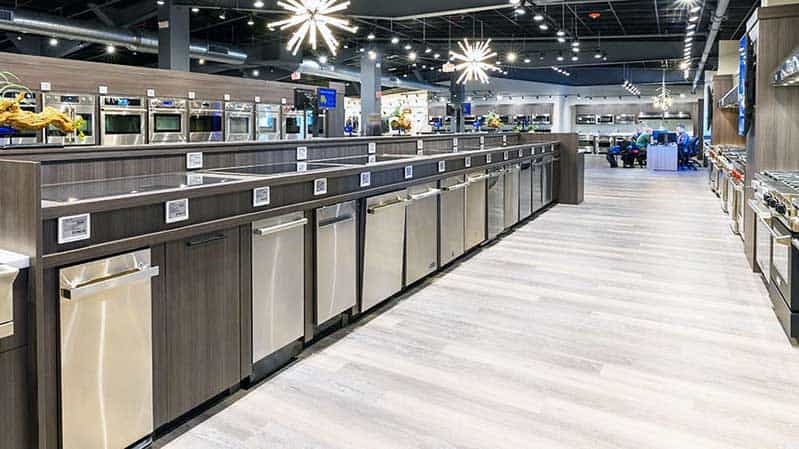 Dishwashers at Yale Appliance in Hanover

You are buying the same dishwasher - sort of.

Buying a Thermador dishwasher for free with qualifying purchases is appealing, especially if you are a builder, just flipping your house, or buying a package of appliances.

However, the better features are in the Bosch line, ironically except for their best, the Bosch Benchmark series dishwasher.

The Thermador rebate is the key in this comparison.

You may want to use the Thermador rebate on another product like a speed oven or microwave drawer and buy a similar Bosch dishwasher.

If you're not buying a package of appliances, Thermador is probably not your best option. Bosch has better features at lower prices.

Get our free Dishwasher Buying Guide with tips, trends, and reviews of all the major brands. Over 1 Million people have already found answers in a Yale guide.