Much has changed since then and should influence your decision to buy either Dacor or Viking. We will look at the companies, their products and then compare.

Dacor is an American based and family-owned company that designs, manufactures and distributes kitchen appliances. Dacor specializes in cooking appliances such as ranges, wall ovens, cooktops, microwaves, refrigerators, dishwashers, and ventilation systems. The company was started in 1965 and has been continuously owned and run by three generations of the Joseph family. The oven also has a filter in front of the heating element which filters out odors allowing you to cook different food groups at the same time without transfers of flavors or odors from one item to another. This system performs much better than the traditional convection oven which just uses the fan to circulate air. Even with the pure convection oven Dacor still has an identity crisis.

This 30 inch range is interesting for a very different reason, because it's well priced compared to the other brands. In the 1980's, Fred Carl, Jr. founder and CEO of Viking Range, discovered some major flaws in the design of commercial appliances with respect to their installation in a residential kitchen he was designing for his family. Thus the Viking brand was born. It was perhaps the industry's most powerful brand. Like Dacor, they have lost their way a bit recently.

Repairs in refrigeration and their D3 series release of ranges in 2012-2013 have really hurt the name and brand. Middleby is now the new owner since 2013. They are a commercial manufacturer based out of Ohio. Hopefully, they will be adding some sorely need manufacturing discipline to the Viking brand. To be transparent, we do not sell any Viking products. 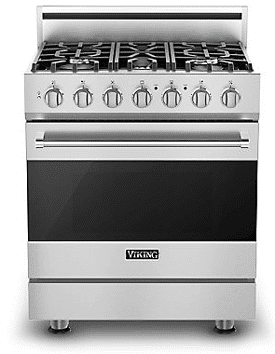 Dacor vs. Viking 30" Ranges: Which is Better?

For comparison purposes, we're looking at the Dacor model DR30GIFSNG and put it up against the Viking model RVGR3305B.

Viking has a warranty of 3 years vs. 1 year for Dacor. However, a warranty does not imply performance. In fact, it almost says the opposite as Viking was the most serviced brand we have ever carried through 2013.

Service is the point of this article. Dacor seems to have learned from their problems in the 1990's. It remains to be seen whether Viking can do the same.

At this point, I would consider the Dacor and save the $1,200. I love the pure convection oven it has to offer. Also I prefer 4 large grates on the surface for those large pans as opposed to 5 smaller burners.

Download the Yale Professional Cooking Buying Guide with features, specs and inside buying tips to all the major brands like Wolf, Thermador, Jenn-Air, Viking, GE Monogram and more. Over 150,000 people have read a Yale Guide.