So, your washing machine has finally called it quits and it’s time for a new one. Be it a top loader or an older front load machine, today’s machines are better performing by leaps and bounds than those of years past.

What Machine Should You Consider?

Several of the leading manufacturers have put out revamped laundry lineups this year. However, I would make a strong case for you to consider the new Samsung front load washer, WF45R6300.

Samsung has been making appliances since the late 1960s. Their first washing machine was launched in 1974. They launched their front load washers in 1997.

Samsung had a bad rap for a while as it was hard to get parts for repairs. This is no longer the case. We often can get them in 24-48 hours when needed for a repair, which is rare.

They did have a massive recall on the top load, not front load washers. I will show you the actual repair rate on a Samsung versus LG, Maytag, and Whirlpool.

This machine sports a large 4.5 cubic foot capacity direct drive drum. Direct drive eliminates the need for belts as the washer plugs directly into the motor. All front loads are direct drive.

The spin speed is 1200 rpm which is really going to spin out the water from your clothes.

The VRT Plus system helps stabilize the drum at these speeds, minimizing noise and vibration. As with most front washing machines, the Samsung is Energy Star rated.

The most notable feature of this new machine is the Super Speed cycle. Typically, fast wash cycles are 15-30 minutes, but you are able to only wash 4 or 5 items. This allows you the option to do a full load 8lb load of laundry in 30 mins. 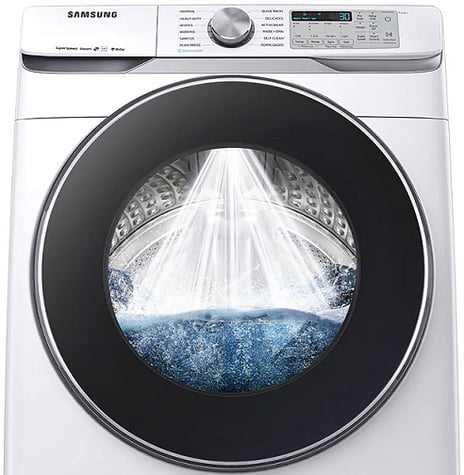 This machine is also Bixby enabled. Bixby is Samsung’s version of an A.I. assistant. Bixby allows you to start and stop your washer via an app as well as delay the start time of a load. You can also receive alerts at the end of your cycle.

This washer also has a steam function which helps with deep-set stains release by gently softening the fibers in the fabrics allowing the detergent better penetration.

Steam is a feature that you turn off and on when needed. A new feature to this generation of laundry is the Swirl+ drum.

The drum has an improved pattern on the surface that pulls more water out of clothing while also reducing the snagging of the clothes on the drum.

And lastly, it has a self-clean cycle with an automatic reminder after 40 loads. This important for those you that have battled mildew and odor problems with the early generation front loaders.

It kills 99% of the bacteria in the drum. It’s very important to keep the door open when not in use to help the tub dry out, which is a major cause of the odors and mildew.

You should also dry the gasket as well. I usually use one of the newly washed fabrics to clean before drying. 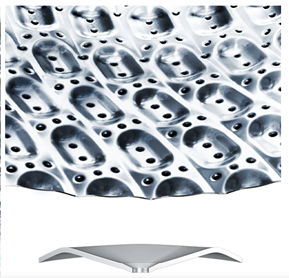 Based on last year, I would say yes, but there isn’t as much quantity/data as the other brands.  LG and Samsung tend to be more reliable

However, due to their popularity, it is harder to find service than the other brands.  Before you buy Samsung (or any other brand) ask about repair

With fewer service techs and competent servicing dealers, it has become a challenge to find decent service in many areas

Should You Buy the New Samsung Steam Washer?

With the redesign, they fixed what was, in my opinion, a major flaw. The previous machines had a very angled display which made it very difficult to see when they were stacked.

I like that they have a true full load, fast wash cycle. Also, the machines are shallower now allowing installation in closets that were previously reserved for LG laundry or compact units.

All in all, the redesign has really addressed the flaws with the previous line and added some very worthwhile features.

I’d recommend pairing with a steam dryer as these machines spin so fast now, they can set creases/wrinkles into clothing. The steam in the dryer will help release these wrinkles similar to the steam function on your iron.

The following would be the matching dryers for this washing machine: 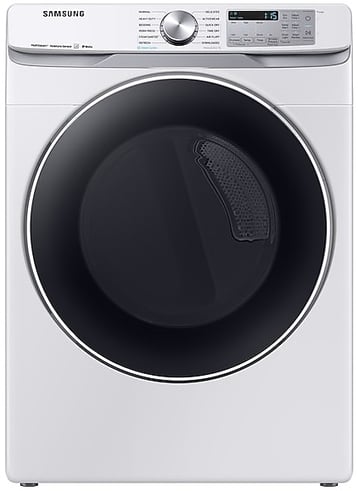 How do steam washers work?

Do they reduce wrinkles?

Steam activated at the end of a cycle can help soften the fabric after going thru the spin cycle, which will help relax the wrinkles.  Using the steam function in the dryer expand on this reduction.

What are the best laundry brands?

Maytag, LG, and Samsung have been the top rated, lowest serviced laundry brands for the last few years.

Read the Yale Washer Buyers Guide for features, tips and brands to consider before you buy your next set of laundry. Over 400,000 people have already found answers in a Yale guide.