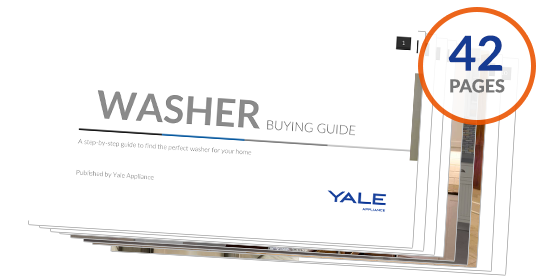 Learn the most reliable brands, best new features and how to buy at the best possible price in this Free Washer Buying Guide. Over 880,000 people have learned from a Yale Guide

Should You Buy a Speed Queen Top-Load Washer?

It's almost like many people want their old indestructible Maytag back from 30 years ago, and Speed Queen is the next best option.

Many people have stopped caring about capacity, water savings, energy savings, having 20 cycles, and Wi-Fi operation.

For that reason, Speed Queen top load washers have an almost cult-like following amongst its customers.

But is it warranted?

In this article, you will learn the main feature differences between the Speed Queen models and their two different wash systems, Classic Clean and Perfect Clean.

You will also learn Speed Queen's reliability based on over 40,000 service calls logged by our service team last year.

By the end of this article, you should know whether a Speed Queen washer is right for you. This article will be more balanced than the other reviews you may have read.

But first, let's answer the question: Who is Speed Queen?

Short on time? Get our free Washing Machine Buying Guide

Speed Queen started as a commercial laundry supplier based in Ripon, Wisconsin. For anyone who has been to the laundromat, commercial machines are solidly built to withstand repeated use and occasional misuse.

Speed Queen residential is built with the same commercial-grade quality.

For competitive brands, a Speed Queen top load washer weighs 196 pounds compared to the average, 135-156 pounds, for other washers.

You will see later in this article that the type of construction translates into better reliability. 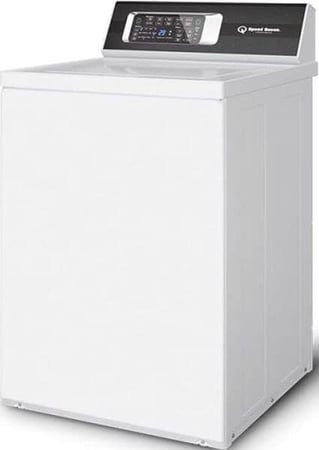 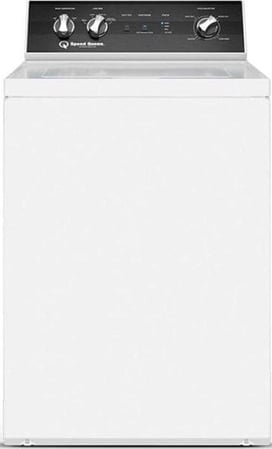 The difference between the three models is their number of cycles. The TR3003 has four cycles, the TR5003 has six, and the TR7003 has eight.

The TR7003 top load washer uses digital controls, while the other models use rotary knobs. With the TR7003 washer, you can set customized cycles as well.

The Only Speed Queen Washer with Classic Clean

The TC5003 is the only Classic Clean model in the Speed Queen line. It's similar to the TR5003 except it has a louder decibel rating and slower spin speed.

The washing system is different, as previously outlined. Classic Clean is motor-driven and is more similar to the old system loved by Speed Queen enthusiasts.

The RPM spin speed is less on this series at 710 vs. 840 for the Perfect Clean washing system.

Before we go over the rest of Speed Queen's features, let's take a minute to understand their two different washing systems.

Classic Clean is only available on their most popular model, the TC5003. I would use the word "aggressive” to describe the washing action of this machine.

Unlike the back-and-forth motion of most machine’s agitators, this machine uses 60 wash strokes per minute. The agitator is also tied to the motor to generate that torque.

Perfect Clean is Speed Queen's latest design. The agitator is tied to the tub rather than the motor. The agitator flows with the water with a less aggressive wash action.

It is also quiet at 43 decibels using an inverter motor.

You can't hear 43 decibels. A quiet Bosch dishwasher, for example, is 44 decibels. Inverter motors are becoming more popular among appliance manufacturers due to fewer parts and quieter operations.

Perfect Clean vs. Classic Clean Wash Systems: Which Is Better?

It depends on what you wash. Classic Clean washing system may be better if you are washing towels, jeans, and other durable fabrics.

Remember, you want to ensure your jeans do not even have a minor tear because the agitator could turn that tear into a larger rip.

The Perfect Clean washing system is better for more delicate items like shirts. It won't yank at the collars due to the gentler agitation.

It's also much quieter.

After researching this article, users have found better cleanability for Perfect Clean by first using the soak cycle and then following with a wash cycle.

Although other manufacturers have started to copy Speed Queen, Deep Fill is a core Speed Queen cycle.

Unlike the energy-efficient front-loads washers, the water fills to the top, so you wash your clothes by water saturation at 40 gallons versus 10-15 in a front load washer.

Because it completely saturates the clothes with water, the cycle times are about 40 minutes versus 60 for most other brands.

Important Tip: Ensure your local servicer will service Speed Queen or any other manufacturer's extended warranty. Manufacturers' warranty rates are usually artificially low, so many independent servicers will not repair your machine during the warranty period.

Forgot that matching sock? You can add it to the already started wash cycle. The lid will only lock during a spin cycle. By that time, it's probably too late, anyway.

Speed Queen doesn't mix your water, so it can be as hot as your water heater allows.

Standard Features for all models:

Other articles and reviews claim Speed Queen will last 25 years or more based on better materials. Yet, there is no documentation to support these claims. You will see Speed Queen in our reliability reviews later in the article.

What Features Do Speed Queen Washers Not Have?

Speed Queen top load washers have 3.2 cubic feet of total capacity and around 2.6 in usable capacity. The average front-load washer has a capacity of 4.5 to 5.0 cubic feet.

Other review sites claim 3.2 cubic feet is the most a washer can wash effectively. However, I read a few front-load operation guides, and none say to limit capacity.

I always used to stuff my front-load washers without an issue. I recently moved to an apartment with a top-load washer. It does not fit as much clothing, and it is harder to stuff comforters around the agitator.

Many washers now employ an automatic detergent dispenser. An auto dispenser delivers the exact amount of detergent needed for the load size at the right time for better cleaning.

Although it sounds gimmicky, smart technology works for laundry. With Wi-Fi and smartphone connectivity, you can see the time remaining for both the wash and dry cycles.

You can even set up text alerts to receive a notification when the cycle is over. Never again will you stand in front of your washer waiting for the cycle to end.

Does the vaunted Speed Queen build quality add up to a more reliable machine? The answer is yes and no.

The most reliable top-load washers are based on a minimum of 150 sold per brand with a sample of over 900 units.

Both LG and Maytag are more reliable, with LG being the best. Speed Queen is front serviceable, simple to fix, and usually covered under warranty. Suppose you can find a company to fix their machines.

Speed Queen does not operate any service of its own.

Concerning customer sentiment, Speed Queen probably has the best reviews on the internet. It does clean well because cleaning through water saturation does work.

Most bad reviews on any appliance are about the process of repair. People expect issues, especially with appliances. They don't expect a long process to rectify them.

How Do Speed Queen Washers Compare to Other Brands? 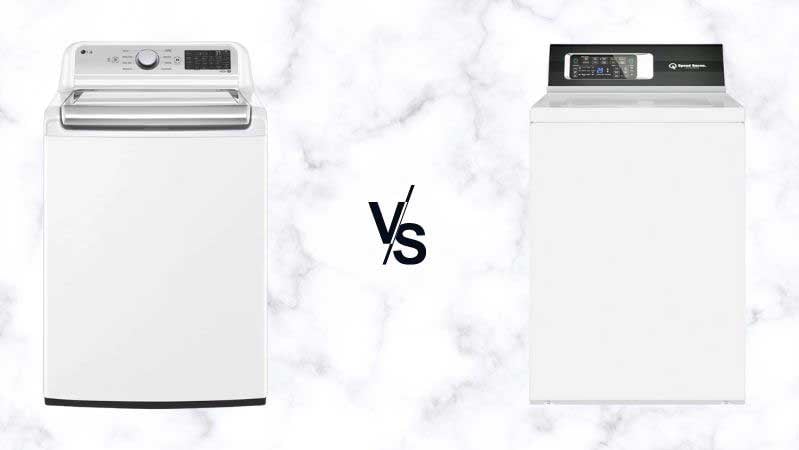 The new HE machines feature an agitator and a larger drum, and this LG top load washer is huge at 5.3 cubic feet compared to 3.2 Cu. Ft. of capacity for Speed Queen.

LG's service rate of 1.7% is also outstanding. LG manufactures more of its appliances than most other brands. They also pioneered inverter motors with fewer parts and fewer problems.

GE introduced Microban technology to reduce mold in their front load washers. The PTW605BSRWS has Microban in the drain hoses, dispenser, and tub parts.

Their "Smart FlexDispense" dispenser allows you to wash your clothes with pods, softeners, and other additives you can customize in their SmartHQ app.

This machine even has a "Tangle Control" cycle to adapt the washing action to prevent tangling (it is a problem I’ve noticed with my top load washer while washing bed sheets).

Most people dislike front load washers due to the possibility of mold and mildew accumulating in the drum.

However, this GE washer provides comprehensive mold protection with Microban antimicrobial surfaces and a fan to dry any residual water.

This washer also uses an automatic dispenser to release the exact amount of detergent needed at the right time.

You only need a capful of detergent at most. When you use more, the foam ends up in the machine causing an expensive service call.

Front load washers are the largest in capacity, use the least amount of water, and are energy efficient.

GE’s front load washer has a faster spin speed at 1300 RPM versus 840 for the Speed Queen. Faster spin speeds mean your clothes take less time to dry in the dryer.

Should You Buy a Speed Queen Top-Load Washer?

This is a really tough call.

The TC5 series is great for heavily soiled fabrics with that heavy wash action. However, you lose many features by buying a Speed Queen washer.

In addition, an automatic dispenser is always worth considering.

Regarding reliability, the product is built well but needs to be fixed more than the others due to its high service rate.

Should you buy a Speed Queen top-load washer? It's not the worst decision, but you should consider all your options.

Download our Yale Washer Buying Guide with all the features, terms, and brands of laundry. Over 1 million people have already found answers in a Yale guide.