Speed Ovens vs. Steam Ovens: Which Should You Buy?

As the Resident Chef at Yale, I'm often asked which appliances are the best to invest in.

One of the most common questions I receive is, "Should I buy a steam or speed oven?"

The answer is not straight forward.

The decision to invest in one over the other is more based on your style of cooking and kitchen habits.

Both are useful appliances. To understand which one is right for you, I will explain what each oven excels at and how this will impact you.

What Is a Steam Oven? 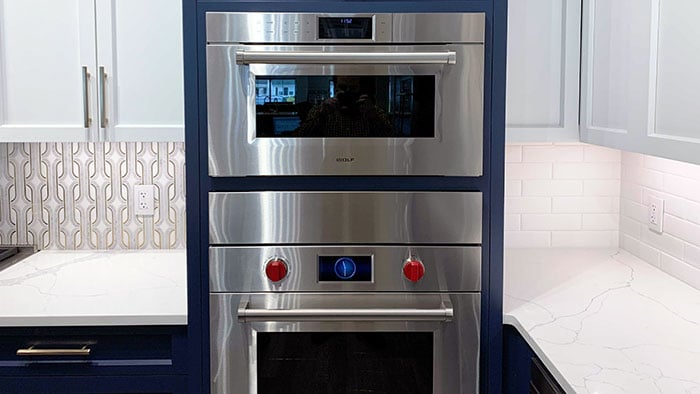 A steam oven uses water and turns it into steam to cook your food.

Many steam ovens have a removable tank filled with water that needs to be refilled when you use the oven.

Some high-end models are plumbed or are connected to a water line. The oven has a valve to release the steam pressure, like a pressure cooker or a tea kettle.

What Is a Speed Oven?

Speed ovens combine the best capabilities of convection and microwave cooking. It pairs the efficient browning capabilities and heat distribution of a convection oven with power and speed.

What Do Steam Ovens and Speed Ovens Have in Common?

Steam ovens and speed ovens share some common features when it comes to convection modes.

They both work as smaller-scale convection ovens. Both will preheat faster than a standard wall oven.

How Do Steam Ovens and Speed Ovens Differ?

Speed ovens use microwaves and convection for cooking food rapidly.

I will use straight microwaves vs. straight steam for one test and convection steam vs. convection speed for another test.

Using the speed oven's microwave setting, I cooked the salmon and vegetables together for 5 minutes on the highest power level.

The speed oven's salmon exploded slightly from the corner (pictured below).

This caused a bit of a mess in the speed oven (shown below), causing extra clean-up time. 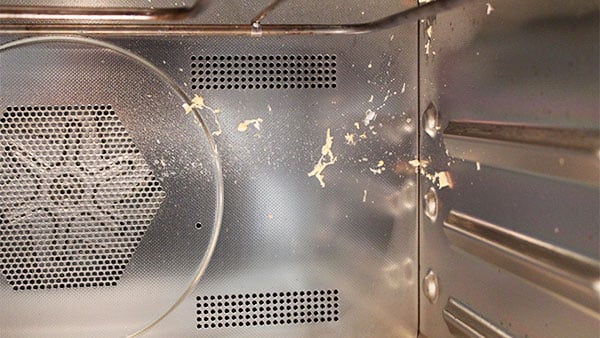 The asparagus' texture was stringy, and it also wilted. 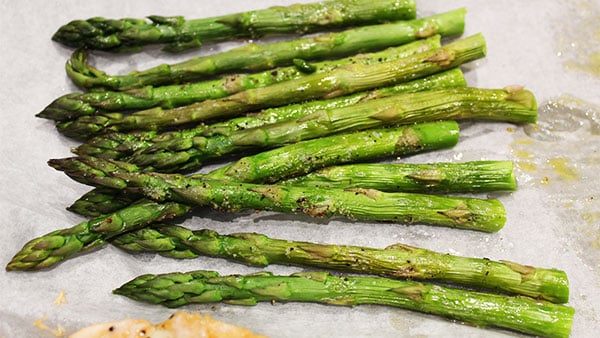 The sweet potatoes had a bit more texture on the outside but were drier to taste.

Final Plate From the Speed Oven: Cooked in 5 Minutes 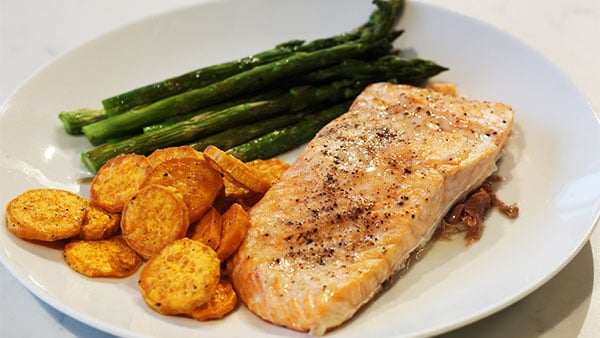 Overall, the salmon tasted and looked good. The sweet potatoes dried out a bit but had great caramelization and texture. The asparagus looked faded and lacked flavor.

For a dish that only took 5 minutes to cook, it was a decent plate of food. 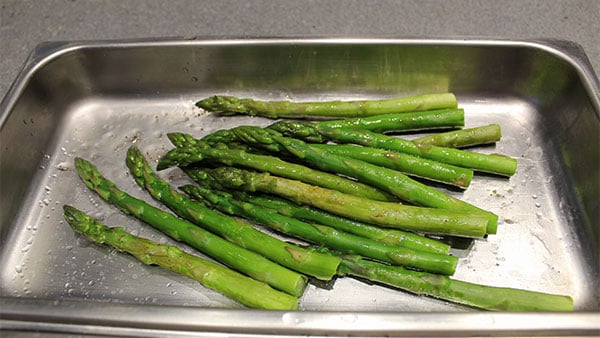 The steam oven's asparagus (pictured above) was vibrant, crunchy, and flavorful.

The sweet potatoes retained a lot more moisture and flavor. But, it did not achieve caramelization. 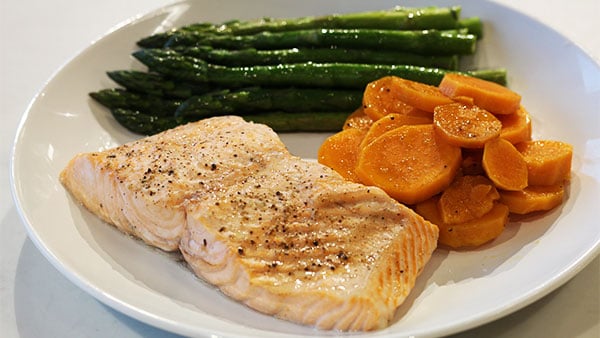 Final Plate From the Steam Oven: Cooked in 23 minutes

The overall cook time for all the items was around 23 minutes, and they all finished at the same time.

The salmon's texture was juicier, and the sweet potatoes retained more flavor. The asparagus had the ideal crunch, texture, and flavor.

The second test was between the convection speed vs. the convection steam option. I roasted half a chicken along with some Yukon gold baby potatoes and green beans for this test.

Both ovens were set to 375 F convection speed and convection steam for the roasted chicken and vegetables. I seasoned the chicken with herbs, spices, olive oil, salt, and pepper. The vegetables were lightly coated in salt and pepper with olive oil as well.

All three items went into each of the ovens to cook simultaneously once the ovens were ready. I used a probe for the chicken in both ovens. 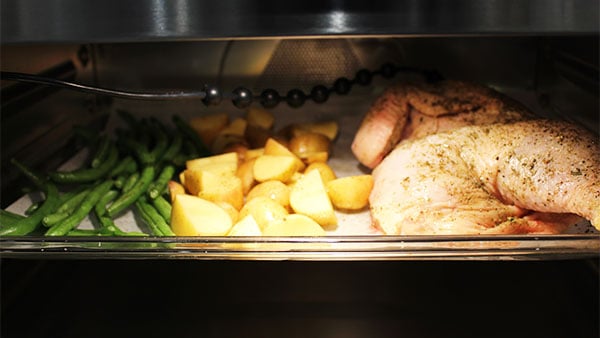 The convection speed oven required preheating, which took around 6 minutes.

The speed oven was operating at power level 3 for microwaving along with convection heat. 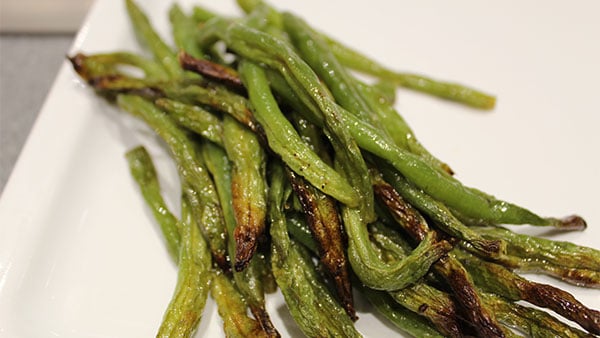 The convection speed oven-roasted the vegetables very quickly. I had to remove the green beans and potatoes before the chicken was done.

The green beans came out 26 minutes ahead of the chicken and were stringy (featured above). 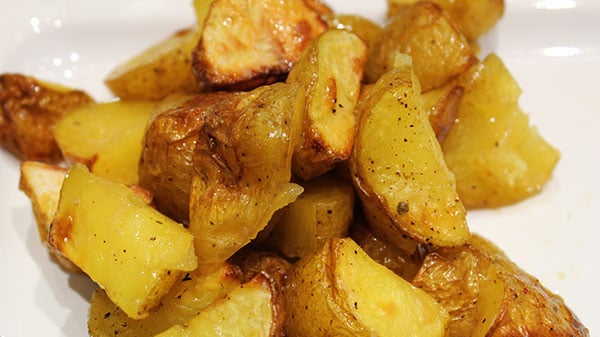 The potatoes were done 6 minutes ahead of the chicken and had a good crunch.

The chicken took around 3 minutes longer to cook in the speed oven, which I found surprising. 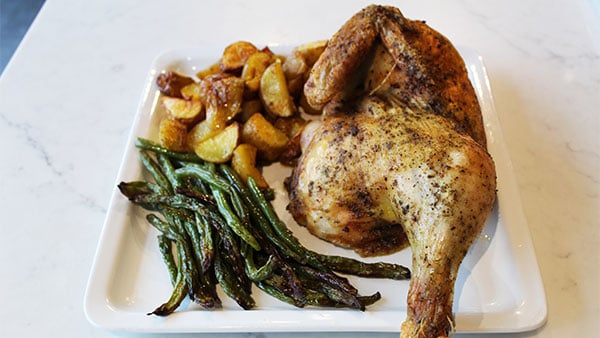 Final Plate From the Speed Oven

The chicken had nice crispy skin, but the vegetables suffered in the process. They dried out and lost some of their flavor and texture. 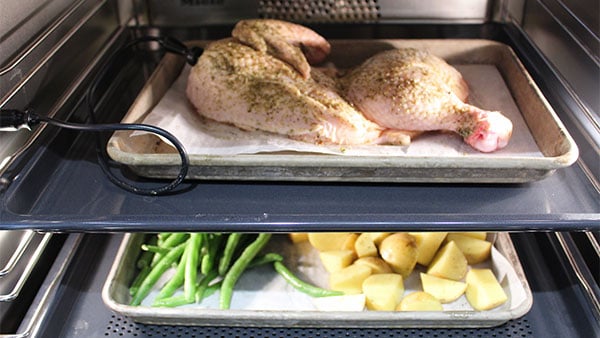 The convection steam oven did not need to preheat but did take around 16 minutes to get to 375 F.  However, the chicken was in the oven while the oven was coming to temperature.

The steam oven injected 60% moisture into the oven along with convection heat.

It retained the moisture level in the vegetables. All three items were able to come out of the oven at the same time.

In the steam oven, the chicken was extremely moist. The vegetables cooked perfectly and retained moisture. They also achieved some crispiness on the exterior. 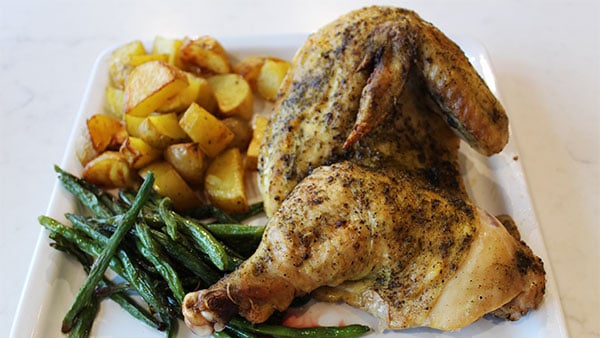 Final Plate From the Steam Oven

However, the chicken could have crisped up a bit more. This can easily be done in broiling or browning mode right before serving.

You can see how the vegetables were impacted by the lack of moisture in the speed oven compared to the steam oven's extra moisture.

The same goes for the potatoes. Although there was more crunch and caramelization on the potatoes from the speed oven, there was a lot less flavor.

The microwaves in the speed oven impacted the food by obliterating the moisture and natural flavor.

Overall, there was a lot more flavor in the food that came out of the convection steam oven.

Speed Oven Vs. Steam Oven: Which Should You Buy?

After conducting my cooking test, here is my recommendation if you're trying to choose between a speed oven and a steam oven:

The steam oven will provide more nutritious results with ample variety, along with color, flavor, and texture than a speed oven.

The speed oven will cook the food quickly, but you will experience some loss in nutrition, flavor, and texture.

If you are trying to decide between a steam and speed oven, ask yourself, what kind of food do you make and eat regularly?

If you answered YES to the above questions, then a steam oven is the right choice for you.

If you answered YES to the above questions, then a speed oven is the right choice for you.

1. Can You Use a Steam Oven as a Normal Oven?

Yes, a steam oven can be used as a normal oven. The only limitation is the size of a standard size steam oven (excluding the Thermador and Miele XXL)

2. Are Steam Ovens Better Than Microwaves?

Steam ovens can reheat food while preserving the integrity, flavor, and texture. Unlike microwaves, steam ovens inject moisture into your food. Microwaves tend to dry foods out by targeting moisture, resulting in a rubbery or dry texture.

3. Can a Speed Oven Replace a Microwave?