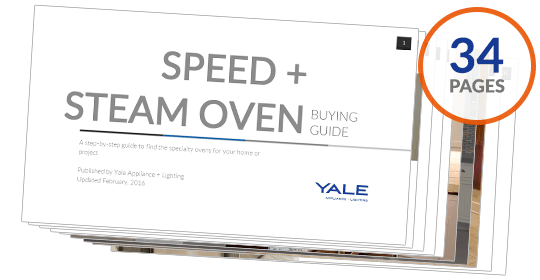 Learn the most reliable brands, best new features and how to buy at the best possible price in this Free Speed + Steam Oven Buying Guide. Over 880,000 people have learned from a Yale Guide

The Benefits Of Cooking With Steam (Reviews / Ratings)

The first recorded use of steam cooking was in Ancient China, where cooks would place reed or bamboo baskets over water-filled hot woks. The French invented pressure cookers in the 1950s, which became a convenient way to prepare meat and vegetables.

Several residential appliance brands produce steam ovens, so you can now access this technology in your home.

We work with several brands of steam ovens with a range of features, functions, modes, design, and price points.

In this article, we’ll cover how a steam oven works, the benefits of steam cooking, and the best steam ovens to consider.

Everything You Need To Know About Steam Ovens

How Does A Steam Oven Work?

A steam oven uses water and turns it into steam to cook your food. Many steam ovens have a removable reservoir or tank filled with water that needs to be refilled when you use the oven. Some high-end models are plumbed or connected to a water line.

The oven has a valve to release the steam pressure, similar to a pressure cooker or a tea kettle.

You can use a steam oven for cooking vegetables, poultry, meats, and casseroles.

Steaming works well for delicate foods such as custards and seafood. Additionally, you can use it to reheat your food by adding moisture back into your leftovers.

This oven can do almost everything you need for your daily cooking and meal prep needs.

The only limitations I’ve found (depending on the model and brand) is with the size. Most steam ovens (except the Thermador and Miele XXL) cannot roast a whole 25 lb turkey, but most people are not using their steam oven to roast turkey on a daily basis anyway.

Let’s take a look at the benefits of cooking with steam.

Steam cooking is a lot more efficient than a traditional stovetop, especially for cooking vegetables, small cuts of meat, fish, grains, or reheating your food.

Most people would use a microwave to warm leftovers or prepared meals, but the dish’s integrity is compromised with this reheating method.

Steam restores the lost moisture into your meals so that they taste as good as they did when they were first cooked.

Pro Tip: You can combine steam and convection to achieve higher temperatures (around 435/450 F) than straight steaming (max 201/212 F) to crisp up or brown that leftover lasagna or fried chicken.

You can also use straight convection in a combi-steam oven as an independent setting if you wanted to cook a smaller portion or single tray of food.

Because the steam oven cavity is smaller, it will also preheat faster. 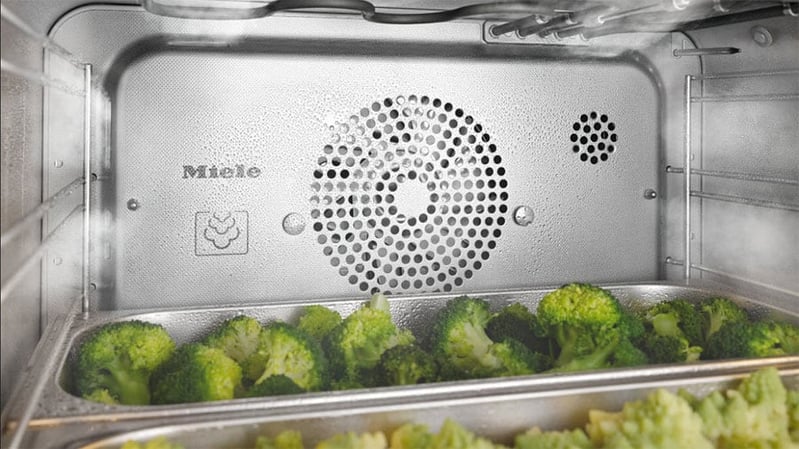 Steam cooking is the healthiest form of cooking. Today there is an enormous cultural emphasis on living a healthy lifestyle.

Your overall health largely depends on how your food is prepared.

Steam cooking retains more nutrients, vitamins, and minerals than other cooking forms. Your food will taste better as well as being healthier.

Very little or no oil is needed at all when steaming vegetables, proteins, and grains. Vegetables are my favorite example of how gentle the steam is because no ice bath is required to shock the veggies once they are removed from the oven.

The steam simply dissipates, leaving you with extremely flavorful, mildly crunchy, and beautifully vibrant produce. Steamed vegetables are moist rather than oily or mushy.

My least favorite way to eat produce is when it’s pan-fried with butter or oil. I eat more produce with steam cooking than I otherwise would because steam cooking is easy and is not dependent on oils

Steam ovens can cook a wide variety of items.

As we mentioned earlier, you can cook, bake, roast, grill, steam, defrost, and warm leftovers are making these ovens some of the most versatile appliances in the industry.

Although many people would be reluctant to do this, manufacturers claim that you could theoretically cook fish on one rack and muffins on another rack, and your muffins will not taste like fish.

For busy chefs who like to cook many dishes simultaneously, steam technology is designed to eliminate flavor transfer.

The majority of steam ovens have the perfect temperature and humidity control as well. 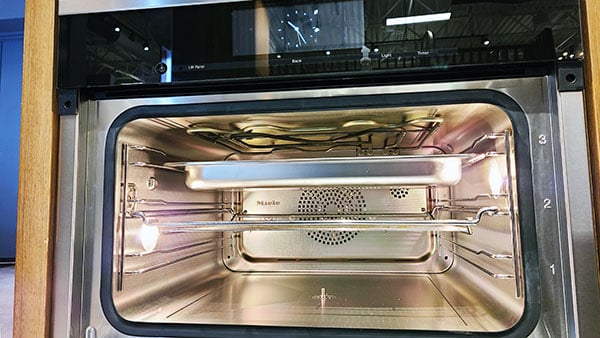 Anyone who knows me is familiar with the fact that I love cooking but hate cleaning.

Steam ovens are the easiest appliances to clean because of the built-in steam, which helps lift food splatter from the oven surface.

Miele steam ovens go one step further and have incorporated the Perfect Clean finish on the inside of the oven cavity, preventing anything from sticking. It also makes cleaning the interior much easier.

Depending on which style and brand of steam oven you invest in, there is also a drain available in some brands, allowing the excess water that collects during steam cooking to exit the appliance.

Other brands without draining systems will have to either be manually wiped out or dried out using the convection mode.

Pro Tip: Additionally, if you have any pans or baking trays that have any food residue baked into them, simply place them into the steam oven, turn on the steam mode, and let them sit in there for a couple of minutes. The steam will help to dislodge the food particles and make your clean up much easier!

Out of these brands, here are the best three steam ovens to consider for 2020. 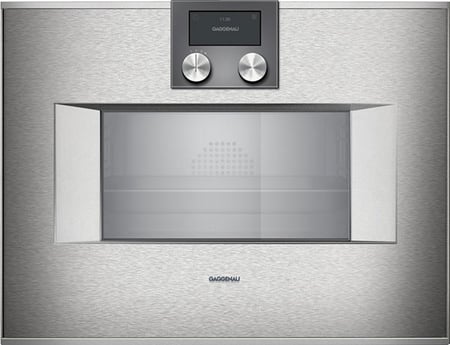 Gaggenau’s steam oven is the best for form and function. With a Gaggenau steam oven, you can cook in every possible way, including sous vide.

It’s a great addition to someone’s kitchen if they're a culinary enthusiast or chef. 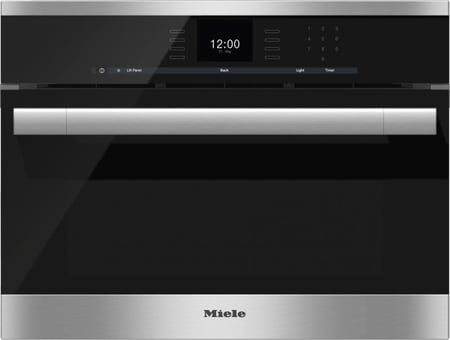 Known for reliability, Miele has the most options for choosing a steam oven with many specialized features and unique modes.

This Miele steam oven has easy automatic programs for guided cooking, known has MasterChef. This is especially helpful for anyone new to steam cooking.

Read More: Should You Buy A Miele Steam Oven?

The Wolf steam oven has a simple interface with a few specialty modes such as Auto Steam and Convection Humid.

One thing to keep in mind is this oven is only available in a non-plumbed version. It does not come with a drain or broiler.

Read More: Should You Buy A Wolf Steam Oven?

Should You Buy A Steam Oven?

Steam technology is an emerging trend within affordable luxury brands.

I can’t recommend these appliances enough. It will make your time in the kitchen more efficient and enjoyable.

The food will retain vitamins and original texture. It’s simple to preheat and even simpler to clean.

However, there is a learning curve. You can check out a few other resources on the Blog. If you live in Massachusetts, you can schedule a virtual appointment.

I would be happy to walk you through the mechanics and answer any questions.

If you live outside of Mass, you still have plenty of resources in our learning center. You can always ask for a demo at your local appliance store as well.