Does the Air Fryer Mode Work in a Regular Oven?

Editors Note: Air frying is the newest feature on many ranges. It seems straightforward enough to use heat to crisp up your food instead of frying it in oil.

The technology is available locally. I am a fan of B.Good and their healthy fries (order them extra crispy).

While Air Fry modes are touted as the next big feature, the better question is: Does it work?

Air frying has become one of the biggest cooking trends lately following the Instant Pot craze.

Typically done in a tabletop device, a couple of appliance manufacturers have attempted to include air frying modes in a standard range.

It makes sense to utilize the existing technology in the range and market it with the trendy label - if it works.

How Does an Air Fryer Work in an Oven?

An air fryer is essentially a combination of a high temperature and power convection system paired with top heat or broiler heat.

The oven is not exclusively built to work as an Air Fryer.

It simply uses the existing technology to create a similar environment to a tabletop air frying device.

The LG oven claims this feature automatically increases the entered temperature by 60 °F for optimal performance when using Air Fry.

The Air Fry function is specially designed for oil-free frying.

It's also recommended to cook food on a single rack in position 3 or 4 without preheating the oven.

What Brands Carry an Air Fry Feature in Their Ranges?

GE, LG, and Frigidaire carry the air fryer feature in their ranges.

"Air Frying" has been out for a few years now, but the mode made available in ranges is more recent.

It doesn't cost anything extra to have this mode, but it's used as a selling point between different convection ranges.

Does the Air Fryer Mode Work in a Regular Oven?

To be blunt, certain foods did not crisp up as well as they did in the tabletop air fryer.

The wings and Brussels sprouts cooked in the GE were slightly crispier and achieved a bit more color than the food cooked in the LG.

First, there is no preheating required for either GE or LG, but the tabletop unit did require a preheat time.

Second, the GE display does not show a timer or countdown when you set a cook time, but the LG and the tabletop unit did give a countdown.

I followed the instructions in the manual for recommended cooking temperatures and adjusted the cook times based on how the food was cooking.

The GE and tabletop unit were both set to 400 F. The tabletop unit was the fastest, 15 minutes, GE was around 20 minutes, and the LG was set to 450 F and took around 25 minutes.

I could have left the wings in longer in both the GE and LG ovens to obtain more of a crisp factor, but they were fully cooked when I removed them from the oven. 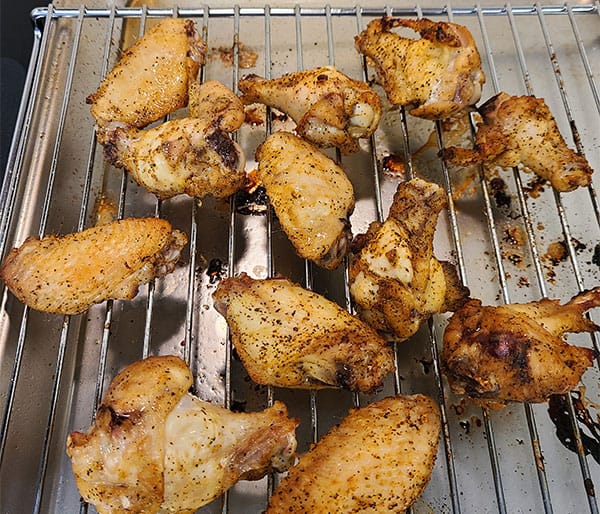 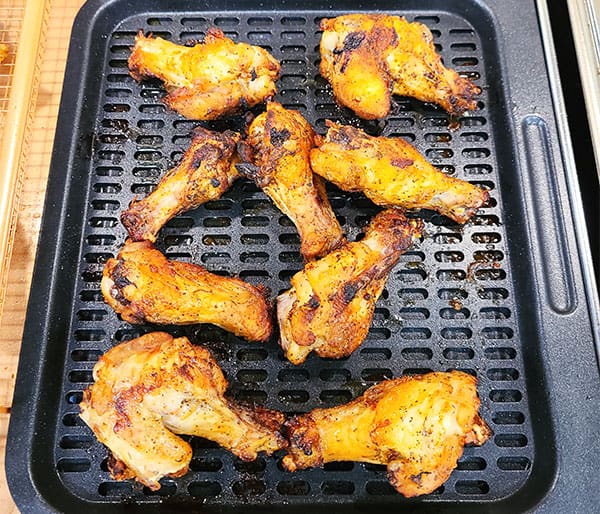 I cooked the Brussels sprouts for the same amount of time and at the same temperature in both the LG and GE. I tossed them in olive oil, salt, and pepper. 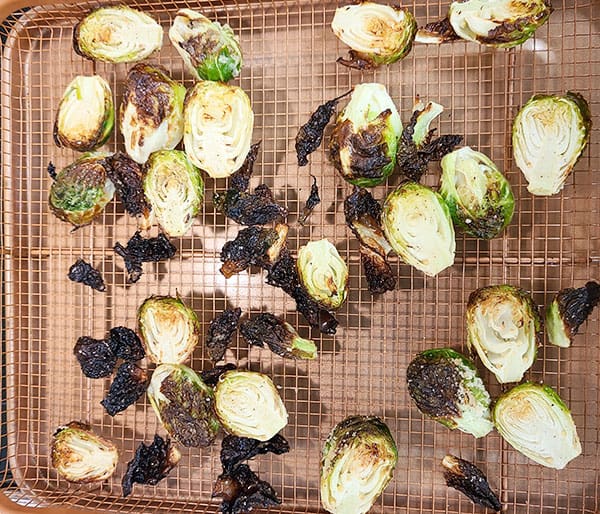 The Mozzarella sticks were about the same in both GE and LG ovens, although they cooked in around 3 minutes in the tabletop device and slightly exploded. 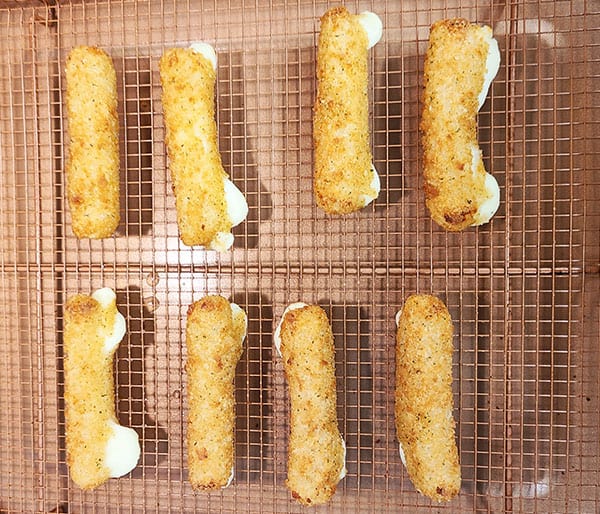 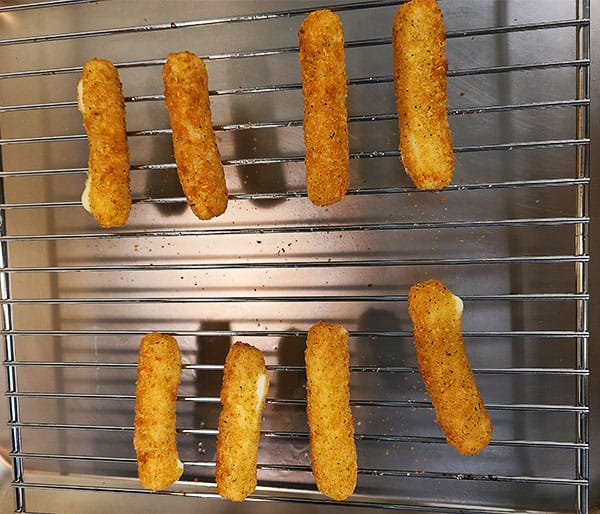 I used the respective instruction manuals for recommended temperatures in the GE and LG.

In this scenario, the higher temperature in the LG gave us slightly better results, but the GE tater tots weren't too far behind. The crispiest and quickest were from the tabletop device.

I did not notice the air being smokey while we were using the ovens. 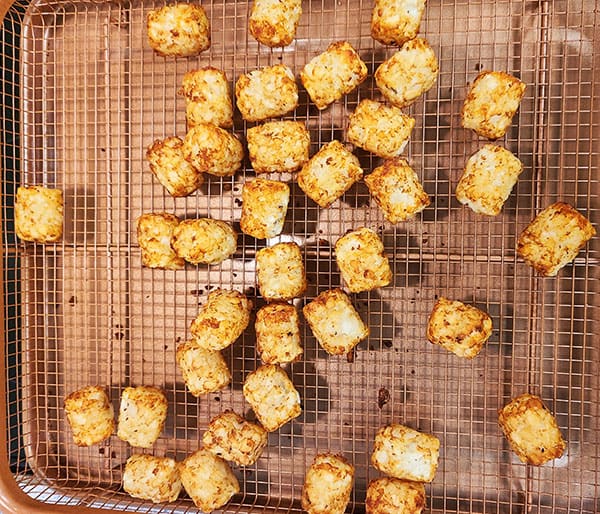 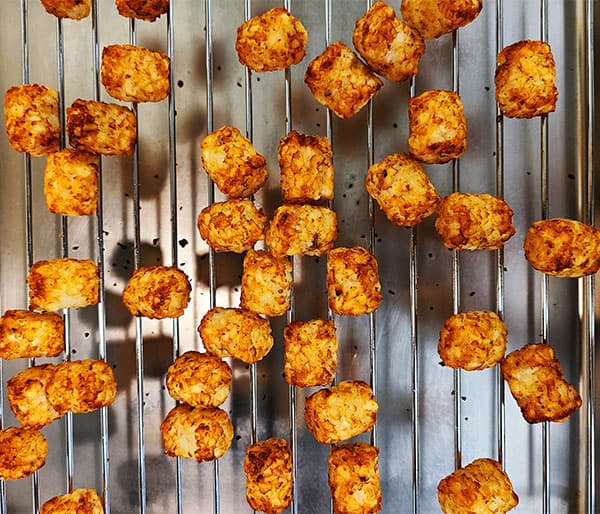 Should You Buy an Oven With an Air Fryer?

I don't think the air fryer mode should be the determining factor in your decision-making. It's a nice add-on feature to have, but this should not impact the cost of the oven.

It isn't easy to compare the cooking results from the LG and GE with a compact tabletop air fryer.

The results were so drastically different in the tabletop device because the cooking space was much more compact, so the heat, in turn, was more concentrated, plus the food was closer to the direct heat source.

If you are looking for the range to Air Fry your foods, expect to cook them a little longer and at a higher temperature than normally cook them to achieve equivalent results.

However, it will not replicate the actual tabletop Air Fryer.

Alternatively, you could also use your regular convection system set to a high temperature and then finish off your food under the broiler to get comparable results to an air fryer.

It might take a little longer and a little technique to perfect the results, but you can achieve similar results without buying a range for the air fry mode.

Need more information on Electric cooking? Download the Yale Electric Cooking Buying Guide with specs, features, and detailed profiles to all the brands. Well over 900,000 people have read a Yale Guide.