Under Cabinet Lighting: LED vs Xenon, Which is Better? 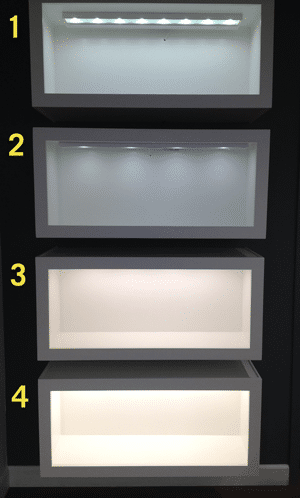 Be prepared to re-learn everything about lighting you know...seriously.

Following is a new undercabinet lighting display at Yale showing the following lamp types from top to bottom:

Before we answer some pretty interesting questions, following are some lighting definitions.

Halogen and low voltage are considered "white" lights at 2900-3100 degrees Kelvin, but only white compared to incandescent.  Our showroom is all "white" LEDs on the appliance side as the light really emphasizes the stainless steel

Short on time? Get our free Under Cabinet Lighting Buying Guide

Confused? Let's talk about lumens....(there is a video at the end, don't worry)

Lumens (according to Wikipedia): The lumen can be thought of casually as a measure of the total "amount" of visible light in some defined beam or angle, or emitted from some source. My definition would have been measurable light to the floor or counter.

The problem with comparing Xenon with LED for lumens and Kelvins is it varies among manufacturers, and like the mattress police there are no enforceable standards. You almost have to see the light itself.

LED is whiter at the same Kelvin teperature as halogen or low voltage.

Let's compare from a specification point of view

Heat: (heat is significant, because a hot lamp will melt your food in a cabinet)

Take a look at this video to see the comparison: