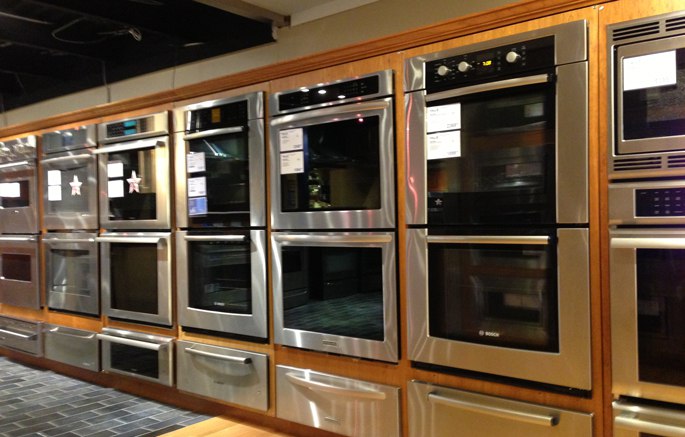 The wall oven display at Yale featuring over 10 brands

Wall ovens have become more and more common in the modern kitchen. Their versatility as well as ease of use are true advantages over the traditional range. There hasn’t really been much progress in the wall oven market in the past 5 years. With that being said, American Range really has incorporated something new into an emerging part of the kitchen. 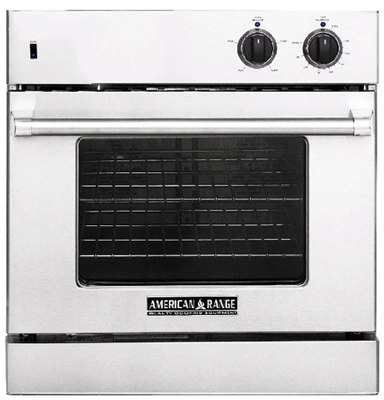 In a single oven, they have two different models. Both are gas (nobody else really offers gas), the difference between the two is one has French doors, the other a more traditional pull down door. Ah, something different. There is only one other oven on the market (Bluestar) that offers a French door model. The French doors offers more versatility from a design standpoint as now you can place them in area that might not have accommodated a traditional door fully opening. I also like the French door idea, as you do not have to lift a turkey over the door. Both models also have their Innovection duel convection system and are manual clean. 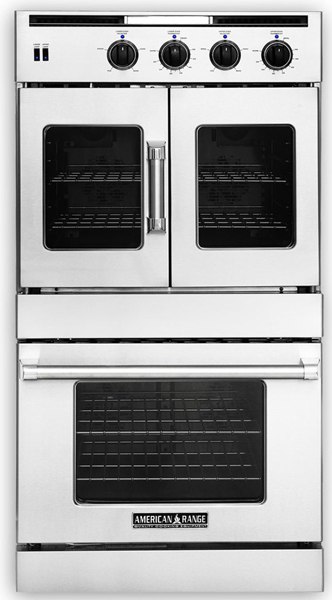 In double ovens there are different fuel types as well as three different configurations. They offer all gas, all electric, or an industry first duel fuel. Duel fuel has long been talked about in ranges, as most people prefer the consistency of an electric oven and the speed and reaction time of gas for their burners. With a duel fuel double oven you have the best of both worlds. Gas ovens typically emit moister heat and slightly better broiling, which is ideal for meats. While the electric offers a more even, consistent temperature which is better for cookies, cakes and brownies. All the ovens are featured with convection (dual fan system) and all the electric ovens are self cleaning (gas ovens are manual clean).

American Range will also give you a more commercial look. There are no control panels and only two switches (oven lights) on the unit giving it a much beefier look. With that being said, it is a newer product so the jury is still out on its reliability, however it does weigh over six hundred pounds which makes me think it is better built (that may be just in my head).

Overall I really like the options of American Range. Never before have people been able to buy both gas and electric cooking in a single wall unit. The price is a little bit on the high side ($7500ish) but for the money you are purchasing a truly unique product. We will keep you updated from a service perspective.

Jonathan Upton is the Sales Support Manager at Yale Appliance. He has spent over a decade in customer support and sales and also been published in the Boston Globe and Daily Evening Item.